St John’s has a heart for mission, and looks for opportunities to share God’s love with everyone and in every place. We employ a Missioner, Amy Ward, to work in our own community of Neville’s Cross, and also in our neighbouring parish of Bearpark with which formal links are being established. We also have involvement and supportive links with a variety of organisations, groups, and mission projects, both locally and further afield.

As a Church we support the work of the Church Mission Society (CMS), and in particular through Catherine Lee, our link mission partner, who works with the Episcopal Church in Taiwan.  We make regular financial gifts to CMS.  Catherine visits St John’s when she is on leave in the UK, about once every three years, and keeps in touch by her Link Letters and blog.  We benefit from seeing Jesus through the eyes of another culture. 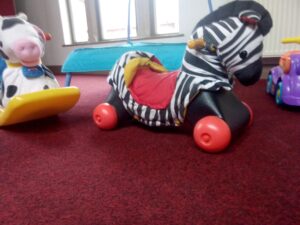 A team from St. John’s runs Play People which is a group for any under fives and their carers from the local community. It meets in the Church Centre on Tuesdays, 9.30-11.30 am, during term time. Every session includes free play, crafts, singing, story time and refreshments. It is a wonderful opportunity to make new friends and meet old ones.  All Welcome, just drop in.

We now have a facebook group for our parent/carer and toddler group Play People, Please join us and spread the word: https://www.facebook.com/groups/1310563349289055/ 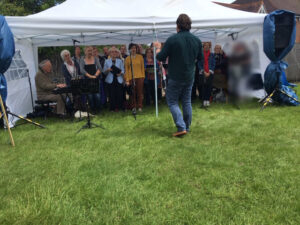 A team from St. John’s organises the community choir, which has been singing together now for over 4 years. Over 45 people meet regularly to sing under the direction of Simon Lee ably accompanied by George Hetherington. After warm-ups, we sing a wide variety of pieces from different musical genres. Each term, we work towards presenting our own concert at St. John’s. These are very well attended and enjoyed by choir and audiences alike. In addition to this, we have performed in Durham Cathedral and at the Eco-Fest. Many people say that singing together with others makes them feel better and they look forward to an enjoyable couple of hours of singing and socialising. We don’t hold auditions, so why not try it? Come along and join us on Tuesday evenings from 7.00 till 9.00.

£3 per session, which includes coffee or tea and biscuits halfway through the evening.

Open door is an informal community café run by a team from St. John’s, offering tea, coffee and a chat with other locals in the Church Centre between 10 and 12 noon on the first and third Wednesdays of the month. In 2019, special events at Open Door raised just under £200 for Marie Cure Cancer Care and £173 for MacMillan Cancer Support.

When things are back to normal again, we hope you will pop in, All Welcome. 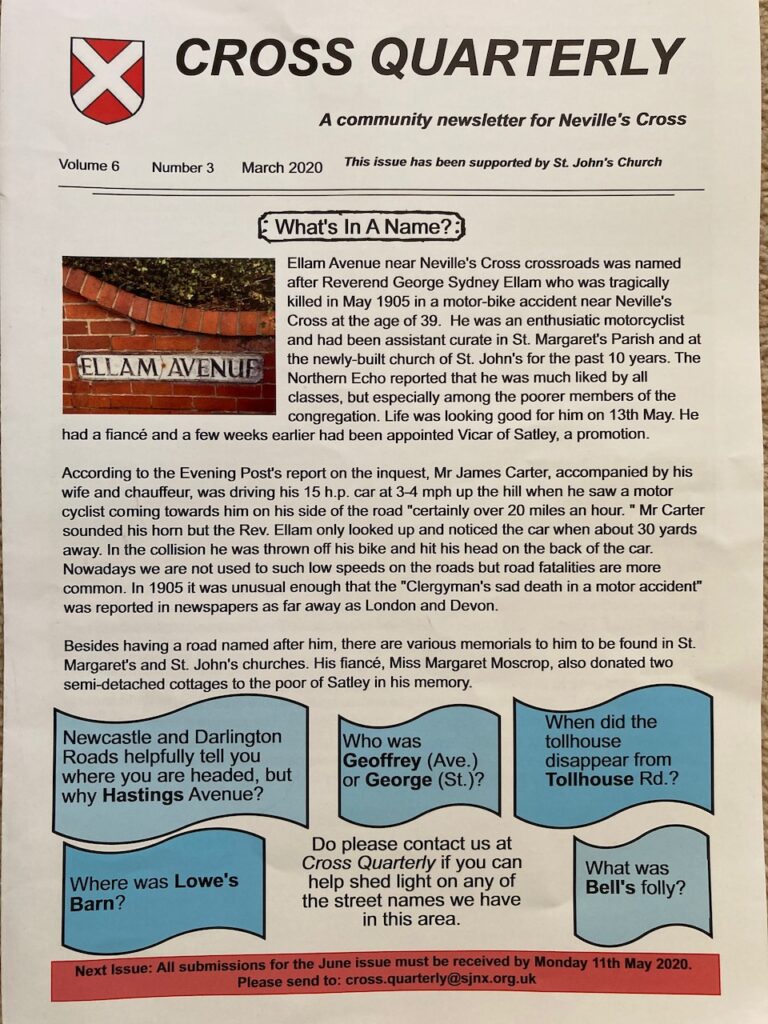 A team from St. John’s edits Cross Quarterly. This is a three-monthly newsletter, serving the community of Neville’s Cross and nearby. It provides articles and photos of local interest, news and information from different local organisations, and a directory of contacts across the community.

Issues are produced in September, December, March and June and we have a group of loyal volunteers, who step up to help us with distribution to local residents and businesses. Local organisations and residents are welcome to send us news, old photos etc.. via the contact form

MOTHERS’ UNION is an international organisation with 4 million members in 83 countries, giving time, money, experience and prayer to support marriage and family life locally and across the world. The MU at St John’s is active in the local community supporting the local hospital, women’s prison, and families in need.  They meet monthly in St John’s on the 2nd Monday at 1.45pm. All are welcome whether a member of not. 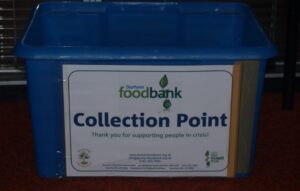 Durham Foodbank supports needy families and individuals. The church is a collection point for donations of food which is taken to Chester-le-Street for distribution throughout the county.

Food donations can be left in the Collection Box in the Church Foyer on Sunday mornings or during the week when the Church is open.

A team from St John’s Church organises, an annual eco-festival in the grounds of the church, usually in June. It attracts many of the local environmental groups, so is a great event to find out more about what is going on locally. People can also enjoy refreshments and entertainment from local choirs and musicians. For more information, click here.

St John’s has a long record of supporting Fair Trade, especially through the Gateway World Shop in Durham Market Place and through a monthly Traidcraft stall in church, Traidcraft is one of the earliest pioneers of Fair Trade in the world, and is a Christian organisation based in the North East.

Our church Traidcraft stall offers a wide range of food and drink products, handmade greeting cards and some kitchen products. The tea, coffee and sugar used by the church is also sourced on Fairtrade terms, and in recent years the church has made a significant mission fund donation to Traidcraft Exchange. Our congregation includes people who have served in various capacities on the boards and staff of both Traidcraft and Gateway.

THE SCIENCE AND RELIGION BOOK CLUB

The Science & Religion Book Club has taken place monthly for the past four years and is aimed at studying the arguments of the “new scientific atheists” and developing counter-arguments where possible. We also consider ways in which religion can be re-interpreted to make it more robust against at least superficial scientific criticisms. We hope to achieve these objectives without appealing to concepts that are too easy to criticise scientifically like Creationism and Intelligent Design. For the religious scientist, we also hope to avoid the accusation of “double-think” that is sometimes made. My personal aim was to find out more about David Jenkins’ “progressive” Christianity. One particular question was to find out if an interpretation of Christianity was possible where the promise of “eternal life” could be read as the promise that “our acts in this life have eternal moral value” so that Christian doctrine might sit more easily in the age of science.

A reminder that the Science & Religion Book Club meets this month on Zoom on Tuesday 26th January at 7.30-9pm. We will be discussing David Attfield’s book “Proclaiming the Gospel in a Secular Age”. I am about half-way through and I can recommend it. The book’s initial motivation appears to come from the author’s self-confessed failures as a priest to convert the unconverted to Christianity and it is constructed to look like a manual to give a detailed theory on the optimal conversion process. However, this structure allows David to address every fundamental argument for (and against) religion in order ultimately to persuade the atheist/agnostic of the rational (and emotional?) case for religion. So in my view it is a philosophical work disguised as educational sociology. Anyway this is my view up to Chapter 7. On a quick look at final Chapter 11, the author may get slightly carried away and the last few pages do not typify the rest of the book. Or maybe they do – you can draw your own conclusions!

The Zoom link can be obtained, as usual, by emailing me.
Also if you want to be added to our mailing list email me at : tom.shanks@durham.ac.uk.

THE CHURCH OF ENGLAND CHILDREN’S SOCIETY

The Church of England Children’s Society was founded in 1881 to support children and young people. Our collection boxes and support, raised through the Christingle service, provide hope and provisions to young people in distress today.

Christian Aid is an international Christian charity responding to humanitarian needs across the world.

The Twins Group meet in the Church Centre every Monday 9.30-11.30 during term time. Just drop in.

Uniformed Groups such as Cubs, Scouts and Brownies meet in the Nelson Hut in the field behind the Church and Parade on Remembrance Sunday.